The WEST NIAGARA FAIR - annually the weekend after Labour Day

Thank  you to our Community for coming out and enjoying our Event. 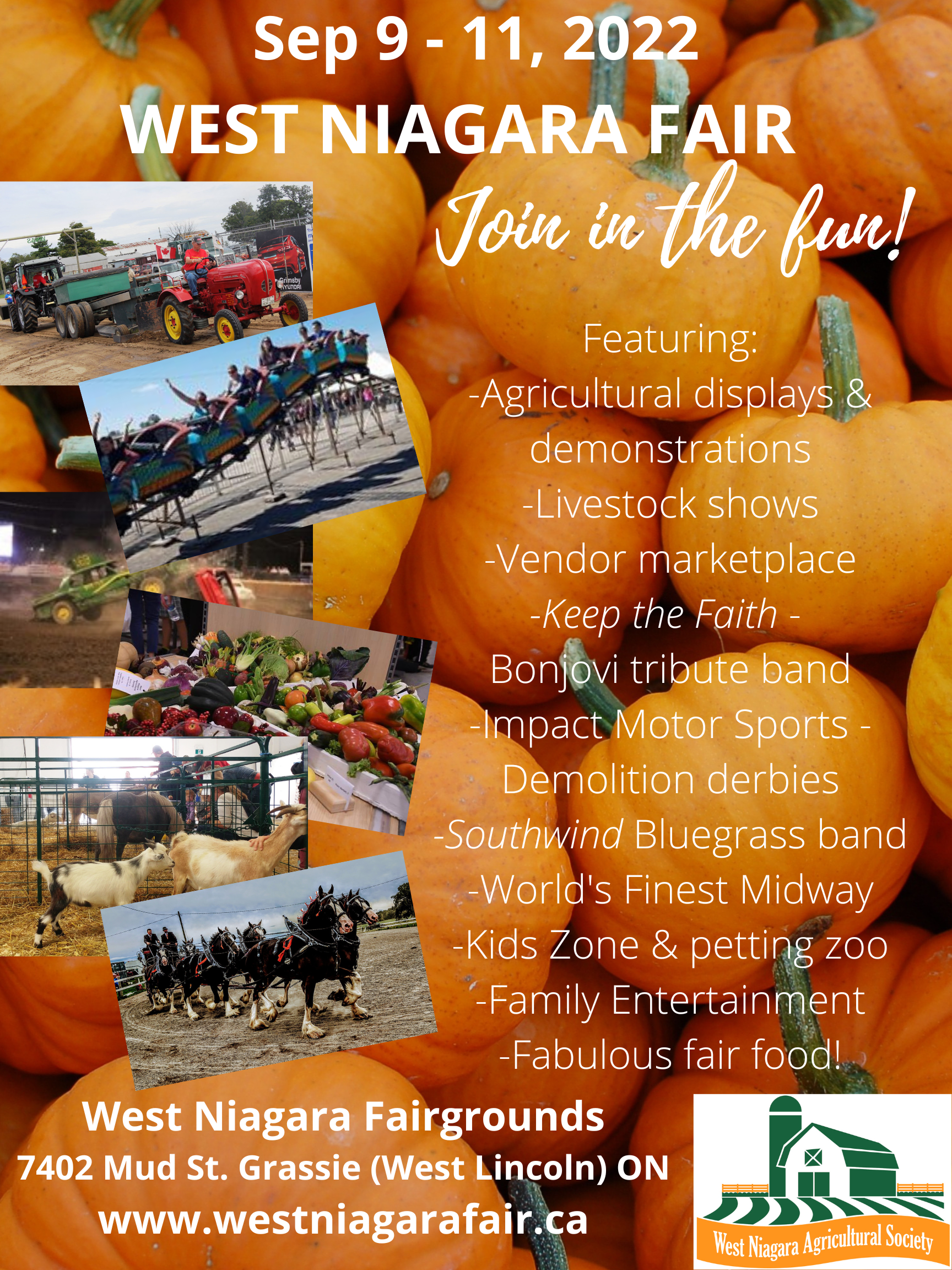 The Fair acts as a meeting place and provides 3 days of family friendly entertainment, great food, and displays and demonstrations to be enjoyed by the whole community.

The Fair issues an annual challenge to not only farmers, but to all community members, of all ages, to present their best in an arena of open competition. Not only livestock, but baking, cooking, all kinds of crafts, photography, antiques, art and talent. And let’s not forget the demolition derbies and the tractor pulls.

The Fair provides a venue for local businesses to sell their wares, and for agricultural commodity groups to educate the public and introduce and promote their cause.

No dogs are allowed at our Fair unless they are service dogs or part of a scheduled entertainment show.

History of Fairs:
Fairs are almost as old as recorded history. In the 1700’s the British crossed the agricultural improvement society with the traditional trade fair/carnival and agricultural fairs were born.

These agricultural fairs were transplanted to the colonies by the earliest British settlers. The concept of fairs soon flourished in North America. In Canada, the first agricultural society was formed in 1765 in Nova Scotia. Ontario followed suit in 1791 with the Agricultural Society of Upper Canada based at Niagara on the Lake. After a few false starts, the system of agricultural societies and their fairs spread all over Ontario in the 1800’s. They were organized by county and township and at one time numbered over 500 in Ontario alone. While agricultural societies used many methods (of varying success) to improve agriculture and the rural lifestyle, their most enduring and endearing legacy was the agricultural fair. Industrial exhibitions and festivals came and went, but the fairs just carried on. Fairs soon became an ingrained part of Ontario’s (and indeed Canada’s) culture. They still are, in our society.

The first Beamsville Fair was held October 8, 1857 while the first Smithville Fair was held in 1878. There were many other fairs in what was referred to as “Lincoln County” but by the end of the Second World War, Smithville and Beamsville fairs were the only two left standing. They were also hosted by agricultural societies that owned their own land. These two fairs and agricultural societies carried on until the amalgamation in 2012. Fairs have evolved over the decades from being held in local fields and town halls in small rural villages to multiple day events at modern, large fairgrounds.

All fairs continue to evolve and stay relevant to how society changes but still maintain that “traditional country fair” feeling! Displays of all kinds! CHCH TV's Tim Bolen has come out for a "sneak peak" of our fair!

Click on the images below to connect to tapings from his visits!